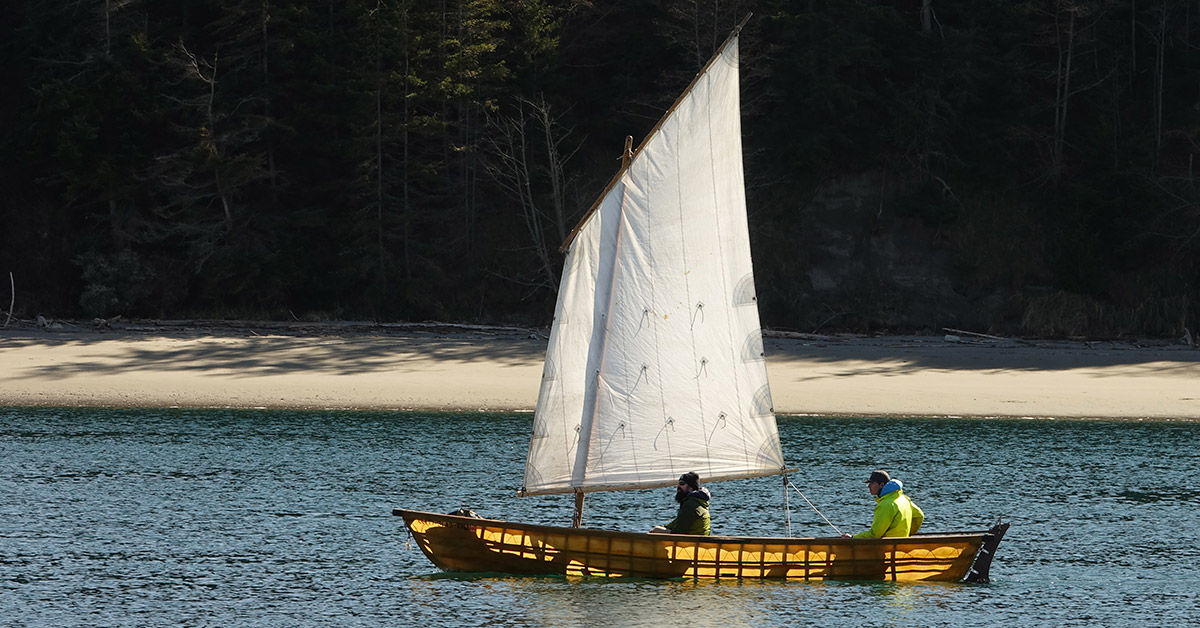 I and a few other small boater friends met up on Rat Island a few days ago. Again. If it seems like I go there a lot, it’s because the place is such a pleasure to visit. It’s also a good central meeting point, since a number of my small boat friends live on Marrowstone Island, and launch at Mystery Bay, with Rat Island about halfway between there and Port Townsend.

It was a stunning day. The sun had just peaked out from the clouds when I left my home around 10am, trailering my little boat behind my equally little car. I was rowing out of the marina by about 10:15am, and quickly raising sail once past the breakwater. There was a nice steady breeze out of the northwest and I could have made it to the beach on Rat Island in 20 minutes, but I had lots of time before our planned meeting around noon, so I tacked back and forth in front of Rat Island for awhile.

With all the sad news in the world, I kept having to remind my brain to shut the hell up, tune in, start seeing, sensing and appreciating. Upside down blue soup topped with puffy white croutons slipped passed eye filters, snow capped mountains poked at grey matter, skin and wind shook hands, and I started to have a more joyful time out on the water. I really needed this. But the little diving waterfowl returning to the surface right in front of my moving boat was not feeling it, flapping and madly diving again.

Around 11:30 I decided to head to the beach. As I approached the narrow entrance between Rat Island and Indian Island I could see the outgoing tidal current was still pumping hard at a couple of knots or more. And then the wind died. This is pretty common here. There is a fairly tall cliff just south of the entrance, and the wind seems to move up and over a buffer of air below the cliff, leaving sailboats suddenly without power at exactly the wrong moment. In Port Townsend, when you walk the Larry Scott Trail near the paper mill, and there is a strong southerly wind, you can experience the same effect. There can be whitecaps on the water, and you may feel very little wind on the trail with the bluff behind you.

I quickly dropped sail, pulled up my daggerboard and rudder, and rowed into an eddy close to the tip of Rat Island. In just another couple of feet I would cross a line of current that would have me rowing like hell to enter the channel and get inside to the beach. The current is strongest right along the south shore of Rat Island when it is heading out. I was nursing a bit of a sore shoulder, so I did not attempt it. Instead I put the bow into the rocky beach, jumped out and walked the boat around the point, leading it with the bow line across the current line and against it up to the spot on the beach I desired.

This mysterious shoulder muscle pain has kept me off the water recently. Between that and my wife also coming down with a bout of vertigo, I have not been on the water nearly as much as I had hoped in the last four weeks, nor have I gotten as much done in the workshop as I had hoped. But the weather was too fine to miss on this beautiful sunny Sunday, so I said screw the shoulder pain.

I pulled my boat up the beach, and threw out an anchor in the sand. Even though the tide was still dropping, I did not want to chance my boat floating away. I have also had big wake from a power boat nearly swamp my boat on the shore here, so I was not taking chances.

It was a very low tide, and the beach was steep, covered in a blanket of small white broken shells. Seals were playing in the current, I assume hunting fish. And the Canada Geese were also nesting again on Rat Island. They told me to get lost. The Olympic mountain range was out to the west, covered in much less snow that I would like to see this time of year, since snow melt is where we get our drinking water in Port Townsend. Mount Baker was out to the east, and ribs of patchy clouds stretched between the mountain ranges with blue connective tissue between.

I grabbed my lunch bag, camera bag and a boat pad, and sat down on a log at the top of the beach, with clear views of Port Townsend Bay, and toward Kilisut Harbor. I snacked a bit, keeping my eyes peeled for my friends, and did not have long to wait before I noticed a little water bug in the distance flopping its way along. It was my friend Glenn rowing his way down from Mystery Bay in his daughter’s 13 foot peapod. It did not take him long to land, and we enjoyed some conversation and snacks. Soon though I was up taking pictures again. There was another sail in the distance.

It was my friend Michael accompanied by his friend Dillan. They were in Michael’s 17 foot skin-on-frame umiak. Glenn recalled that the boat had originally been made by James McMullen, using the forms and basic hull shape from an Iain Oughtred Tirrik design. Michael confirmed that when he arrived (good memory Glenn), and that James had given him the boat when he was in high school. Michael has since re-skinned the boat, and done some work on the balanced lug rig. It has really simple and rough spars made from local small timbers. The boat moves very well with this rig. All and all it is a very capable boat at about the lowest cost you could have for its size. I loved it. Soon after arriving Michael and Dillon had to leave for a short stint to pick up Michael’s daughter on the beach at Fort Flagler. She had been taking pictures of birds, but hailed Michael on their little FRS radios, requesting ferry service to Rat Island.

At about the same time, friends Jo & Roger showed up in their junk rigged Walkabout. Glenn had spotted them leaving Mystery Bay well after he did, and was surprised how quickly they made it, given it was all upwind. They admitted to doing a bit of motor sailing, with their Electric Paddle outboard. They did not want to miss hanging out with us all.

It was a real pleasure to shoot the shit with boating friends in person again, eating lunch, and talking about whatever came to mind. Michael’s friend Dillan works on tugboats out of Hadlock, and he shared some interesting stories about how the paper mill works, for wood chip delivery, and how huge the motors and props are on the four tugs he works on. I believe he said the tugs have around 2,000 horsepower each, and props nearly ten foot tall. They have solid stainless steel shafts over a foot in diameter. He said they still managed to shear one of those off. What happened was that someone had the bright idea of wrapping the shaft in fiberglass, which actually trapped water against the shaft, causing corrosion and the eventual failure. And we all talked and dreamed a bit about the type of boat cruising we would like to go on this spring and summer.

Glenn and I both mentioned similar thoughts about our proximity to the military base on Indian Island, which is right next to Rat Island. With what is going on in Ukraine and tensions between the U.S. and Russia, if Indian Island and the Naval Air Station on Whidbey Island were targeted by nukes, all of us who live in the area are carbon dust. Then again, it’s likely no one would survive that war for long, so maybe quicker is better than later. Heavy thoughts for little boaters.

The entire time we sat chatting and eating, we watched the tidal current moving out, grounding our little boats. Probably an hour later we could see it going slack, and then watched the water start to float some sterns. As enjoyable as the company was, lazing about in the sun, that was the sign to leave. Jo, Roger and Glenn wanted to ride the incoming tide home to Mystery Bay, with a help from the northwest wind we were enjoying. And I wanted to get moving also, before the incoming current made it difficult to leave. Micheal and party took off at the same time also.

I had a pleasant sail back. The wind was moving my little boat smartly along, and I thought I might do a cruise past downtown Port Townsend before heading back to the marina. But the wind fell off, and with the tide coming in it became apparent that I was not going to be able to cruise by downtown under sail. In fact, if I wanted to make it home for dinner I would have to drop sail and set to the oars, heading straight back to the marina, which is what I did.

If I have my way, this entire spring and summer will be filled with similar mini boating adventures. They are at the heart of a good life in the Pacific Northwest. My life at least, and I think that many of my fellow boatheads might agree.

P.S. My new insulated rubber boots did just the trick, keeping my feet warm the entire day. No more freezing feet on winter boating adventures! But I did come up with a list of new things to fix on the boat before the next sail. I have a downhaul jam cleat that is sticking, and a few other projects.