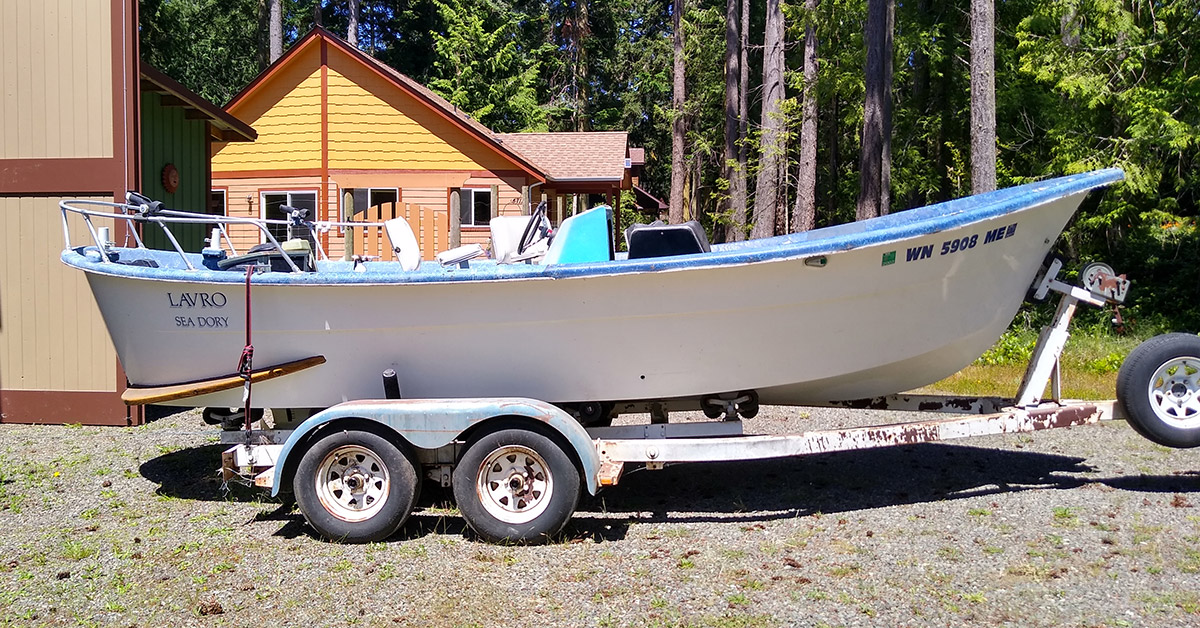 A few weeks ago I finally started the work on my Lavro Dory. My plans for the boat required removing the old cabin, old motor, and pretty much everything else inside.

Removing the cabin was not too hard. It was made to come off, with bolts around the edge. I pulled the bolts and other hardware off, strapped it up to my chain hoist. I had to cut a few electrical cords and disconnect the fuel fill at the bow, and off it came. With the cabin off the boat reminded me a bit of a Panga hull, except for the stern.

And hour of work with the sawzall and it was in pieces in the back of my truck for the next dump run. I have a few friends who own these boats, so I kept the windows in case they might need a replacement.

Next I pulled the old 85hp Suzuki 2 stroke outboard, that weighed about 260 lbs. It was not as difficult as I imagined, and I soon had it hauled up on the chain hoist, with just enough clearance to pull the boat out from below it.

Next out came the seats and and steering console. A few friends took the seats. And about a week later I sold the old 2 stroke motor to a fellow, and he also took the entire steering console along with a bunch of other stuff I thought was going to the dump.

Everything was easy until I got to removing the fuel tank, which turned into a big pain in the butt, and a lot of nervous work. Gasoline fuel tanks are a serious explosion hazard. My father is a welder who has made many aluminum marine fuel tanks, and I recalled many horror stories of deaths from explosions when guys started working on tanks they thought had no fumes or fuel.

The previous owner had drilled a hole in the top, and later capped it with a stainless bolt. That, plus the tank’s age, and where it was placed in the boat, all made me decide to remove the tank and replace it with a new one. The owner told me the fuel tank was empty. But it smelled of fuel. So I figured there must just be a little inside. I decided to flood the tank with water to displace any gas fumes. Well, doing that I discovered that the tank in fact had a bunch of old fuel in it, and some overflowed, which made an awful stench and cleanup problem. It is a big 43 gallon tank.

Once I finally had all the old fuel siphoned off into an old portable tank, I once again filled the tank to the brim with water. With that water still in it, I cut a hole in the top with a sawzall. This allowed me to get inside to get any remaining fluid out and any fumes. I planned on sticking a 2×4 inside through this hole and using that to pull the tank out with the chain hoist. I could not figure out how the tank was held in place, and had made an assumption that they had glued the bottom directly to the floor of the boat.

That turned out to be incorrect, which I discovered by lifting the entire bow of the boat up when trying to remove it.

Upon closer inspection I realized that the builders had fiberglassed over aluminum tabs that were sticking out of the sides of the aluminum fuel tank. And then they built the v-berth over the top of it.

So to remove the tank I had to cut out the v-berth, and then chip away the fiberglass holding the tank down. And then the tank came free easily.

I am glad I got it out. It had not been installed correctly, although it did seem to have lasted 40 years despite this. But you are supposed to have an air gap around all surfaces of an aluminum tank for corrosion reasons, and this one was set right down on the floor, with a bit of fiberglass wrapped around it on the back edge, which would trap water against it.

I don’t like the idea of the tank in the bow anyway. The weight balance in the boat would change as the fuel level dropped. And I did not want a fuel tank inside my new cabin. Instead I will have two tanks placed mid-ship, so that weight balance will not change as the fuel level adjusts. And they will be easily removable for inspection from the cockpit, and have vents out the hull sides.

Moving on I will continue stripping out any and all extra stuff from the hull, to reduce weight before I start building on it.

And then the big challenge is getting it off the trailer, and into the smaller area of my shop that I can close off and heat, for winter epoxy work. Stay tuned!