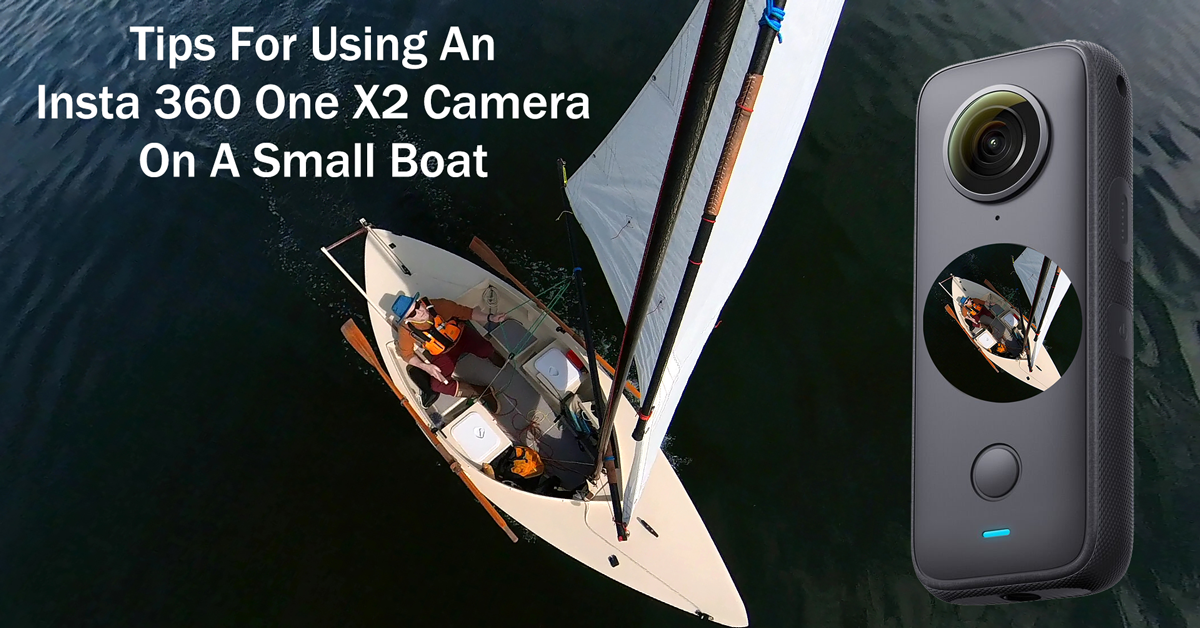 In the video below I share many details about using an Insta360 One X2 camera on my small boat. I love this camera, and consider it a bit revolutionary for telling small boat stories. If you are considering one of these cameras this should help you decide if it is right for your small sailboat, kayak, SUP, rowboat, or motorboat. And read below the video for more pros and cons of the camera.

In the video you will learn:

You can turn off the captions in the lower right hand corner. Click CC, and then click None.

Correction: In the Insta360 software, the transition options control how quickly the camera perspective appears to move between keyframes. For example, Smooth Dissolve uses the same speed the entire transition. Fade-In-Fade-Out starts it’s movement slowly, picks up speed in the middle, and then slows down near the end. There are five different transitions options, and you can also choose no transition. So they are different than the transitions between clips in most other video editing software.

The Insta360 One X2 is a 360 degree video camera, which allows you to share what viewing angle you want, without having to move the camera, leaving your hands free to manage the boat. I first used it on a three day cruise in my dinghy to Sucia Island, in the San Juan Islands of Washington State. After watching that video, many people asked me about the camera and how I mounted it.

Below are links to the camera and mounting equipment I use. They are Amazon affiliate links, meaning that if you click and buy, I may make a small commission, at no extra cost to you. Full disclosure and privacy policy here.

There are links to audio recording gear below.

More Positive Stuff I Missed In The Video

Voice Control
In addition to the remote control, another method of controlling this camera from a short distance away is voice control. Turn that feature on, turn on your camera, and then yell at it “Take a picture you little shit”, and it will do it, despite the verbal abuse. You can start and stop video, take pictures, shut down the camera, and tell it to mark spots in the video. I have not used it much, because there is something about devices listening to me all the time that creeps me out. But it can be very handy on a small boat so that you don’t have to leave your position at the helm.

Pureshot HDR Pictures & Videos
When you take pictures Pureshot is normally turned on. And what this does is take nine pictures, and blend them all together to capture a broad range of dynamic range. Colors also pop more. It works great. You can also shoot HDR videos, but they don’t recommend using it when the camera is moving, which is most of what I do, so I have not tested it much.

Screenshot Pictures From Video
Note that in the software you can grab screenshot pictures out of any video. They are not bad. But I did test the resolution quality of those screenshots against a picture taken by the camera, and the picture wins, showing a noticeable increase of detail.

Phone App Software Has Lots Of Handy In The Field Benefits
The phone app has amazing features for viewing, and controlling the camera, out in the field. And it also is very good for editing the video, and quickly sharing it to the web. Since I use the camera mostly on a boat, and I don’t want to be looking at my phone, I don’t use it. Plus it decreases battery life on the camera and phone. You do need a pretty powerful and modern phone with lots of memory to handle these video files.

Sound During Timelapses
In the video I mentioned that when you speed up the footage in the Insta360 software, you will not have any sound that the camera recorded. But, you can add sound during that period using other video editing software that I mention below.

More Downsides To The Insta360 One X2 Camera For Small Boats

While the video above mostly focuses on what is cool about this camera, and the benefits of the camera easily outweigh its flaws, there are some issues you should know about.

You Need The Phone App To Register & Use Your Camera Initially
Although I don’t use the phone app regularly, to get the camera going after I purchased I had to download the app to my phone. Once downloaded, you will connect to your new camera through your phone and activate the camera. You can’t use the camera until you do that. That is also the easiest way to update the firmware on the camera.

This Thing Eats Memory – You Need A Storage & Backup Plan
The video files for I created for this article ate up about 60 gigabytes of hard drive space on my computer. That was true for the last video I did also. That means it won’t take long to fill up a terabyte hard drive with videos, not to mention backups. It is a big downside of this camera.

If you plan to take a lot of videos with this camera, you need to develop a plan for what you will keep, what you will delete, and how you will store and backup your videos.

I ended up installing another two terabyte hard drive into my computer as storage. And my backup drives will have to get bigger.

Single Lens Steady Cam Mode Stabilization Problem
The very first time I used this camera on my boat I discovered a problem with it. I had accidentally put the camera into single lens mode, which they call Steady Cam. This makes the camera work more like a GoPro, only using one lens. But, when I looked at the videos later, I noticed something very odd. The image stabilization, and horizon leveling feature in the software is called FlowState Stabilization. And in this mode, on a boat, FlowState does not work right. The horizon was level, but any clouds in the sky moved when the boat moved. It looked really weird, like the clouds were connected to the camera.

I contacted Insta360 about it, and it is a known problem, that may be fixed in future firmware updates. So don’t expect to be able to use this camera in Steady Cam mode on a boat. Unfortunately I deleted the footage showing that problem. See why I hate deleting original footage? You never know what you might need it for.

Further Editing Software & Time May Be Required
The Insta360 software can output a usable MP4 video file, after you have finished all of your reframing and editing. But the software is not capable of making a lot of other changes that you may want, like adding in music in spots, text, transitions between clips, and adjustments to colors and exposures.

I use Adobe Premiere Pro for that, a fairly expensive solution, that I happen to already use for our business. Both Microsoft and Apple have good free software options for video editing. The videos on this page required many hours of work in Premiere Pro, after I had done the reframing of the initial clips. That is a huge downside to taking lots of video. Compared to photography, to put out a decent video requires many hours of work.

Lens Guard Options Have Issues
Note that I have linked to two lens guard products above, but I don’t use either of them. The reason I don’t is because I use this camera outdoors, and those products really reduce image quality, both in terms of flares in the images from the sun, and reduced sharpness. They also both cause more problems with the images stitching together in the software. And I found out in reviews for the Premium Lens Guards that they just pop off when the camera is dropped, which does not exactly protect your lens then. My plan is to be careful with it, and religiously use a lens cap when the camera is not in use.

Sound Quality Not Great On A Boat
As noted, I use a separate sound recorder, a Zoom H1n, because I don’t like the sound quality out of the camera. I also have it mounted on a vibration dampener, so that the vibrations in the boat hull don’t translate into the recorder as easily. That is a big problem with the Insta360 sound. I am still not satisfied with my sound recorder mounting position, so will be testing more, but it is much better than the camera sound.

If you could attach tiny deadcat wind muffs to the five different microphones in the Insta360 camera, the sound would be better, as far as wind goes. But that is not really possible because they will be visible in the footage because of the super wide angle lenses. And on a boat, outside, you have to have a deadcat over your recorder or any wind will make it sound bad.

Using a separate sound recorder means you have to sync up the sound with the video in editing software later. It’s not hard, but a bit of a pain. It helps to clap, and say a clip number, to sync them up. And that is why you see those clapboards used when making movies.

Another Option For Better Sound

I try not to talk much in videos, so my sound recorder system is OK. And when I do talk I use a lavalier microphone, plugged into my Zoom recorder.

If I did want to talk a lot, I would switch to a Rode Go wireless microphone system, which would record the sound in the camera, that way I would not have to sync the audio and video each time. To do that you need a few accessories that are linked to below, which make it so the recorder is not visible to the lenses, so it does not show up in the 360 degree video footage. That would be a nice setup for blogging, if that is your thing. Rode also makes a two channel version, which would be very handy if you are interviewing, or often have two people talking in your videos.

One notable downside is that to plug the wireless microphone into your camera, you have to open the USB door, and I don’t think the camera is still waterproof with the mic adapter plugged in. Neither though is my audio recorder waterproof, which is why I have it tucked under the deck a little in my boat.

Ulanzi makes the cold shoe attachment, product code PT-20. It seems out of stock at a lot of places. Depending on where you buy that cold shoe, it may also come with the connection cable you also need.

Zoom Audio Stuff That I Use

Cruise Along The Port Townsend Waterfront With The Insta360 One X2

After doing the test footage for this article, I then did exactly what I suggested you don’t do, in terms of keeping your clips short. I stuck the camera on the back of the boat, turned it on, and just left it on while I sailed the length of the Port Townsend waterfront. And that is the video below. The video is long and a bit boring, but it does show more of what this camera can do. And if you enjoy sailing and Port Townsend, you probably won’t mind how long it is. Plus, if you like boats, there is a nice surprise at the very end. And to stave off your boredom, keep an eye out for two interesting shadows that cross the sail.

OK. That is it for now. I will likely update this page in the future as I learn more about this camera.